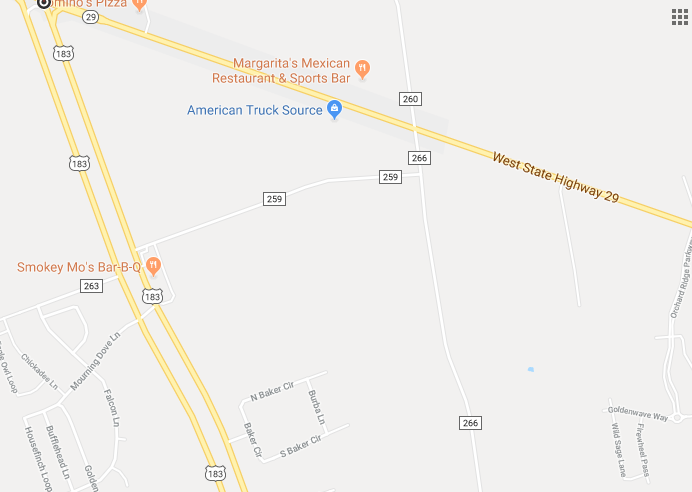 Improvements sought for section of U.S. 183 in Williamson County

WILLIAMSON COUNTY — Ed Burton of Austin lost his entire family in a four-vehicle wreck on U.S. 183 in Williamson County in March. His brother, Norman Burton, 48, and his mother, Theresa Burton, 79, were killed after a Jeep struck by another car was pushed into oncoming traffic and hit their Cadillac head-on a few miles north of Texas 29.

“It’s just the most horrible feeling,” Burton said. “I can’t believe they are gone. I went to the crash site, and it was two lanes going north and two lanes going south. I don’t understand why that is so dangerous.”

But authorities said they have been concerned for years about the 12- to 13-mile stretch of U.S. 183 that includes the area where Burton’s relatives were killed. The stretch runs from Texas 29 north to the Burnet County line.

Much of the highway there has no shoulders, no turn lanes and no median. Williamson County Sheriff Robert Chody said drivers tend to speed on the long, rolling hills along the route, which makes it dangerous for people slowing to turn into a subdivision.

In the northern part of the stretch of 183 that is causing concern, the Texas Department of Transportation plans to spend an estimated $1.3 million to build a center turn lane and shoulders along a section less than a mile long from south of County Road 212 to north of Live Oak Trail. Bids for construction will start in May 2020.

TxDOT plans to spend another $3.8 million to build a center turn lane and shoulder on 183 from RM 1869 to Cole Drive, a less than one-mile stretch in the southern part of the 12-mile portion deemed dangerous. It is set for bid in June 2022.

In February, TxDOT lowered the speed limit from 70 to 65 mph on 183 from Texas 29 to the Burnet County line because of residents’ concerns.

Sheriff’s deputies, Leander police and Texas Department of Public Safety troopers also increased traffic patrols along that section of the highway, and a few miles south of it, twice in April after residents voiced complaints, Chody said.

During the first traffic initiative April 2-5, officers wrote 222 citations, he said. One person was driving 103 mph, and another was stopped for going 96, Chody said.

A few days after that traffic initiative ended, another man was killed in a wreck along that stretch of highway. James Kanzenbach, 65, died April 10 about a mile north of Florence when he swerved to the right to avoid a vehicle that had slowed down to turn left, according to a DPS report. It said he then swerved back into the inside lane, crossed the highway, rolled over and struck a tree.

During a second traffic initiative on 183 from Hero Way to the Burnet County line April 24-27, officers made 144 stops, wrote 40 citations and issued 93 warnings, officials said.

Williamson County Commissioner Cynthia Long, whose district includes that section of 183, said she has heard residents’ concerns for years about the safety of the road, which is getting more crowded with drivers as the population grows.

“People who aren’t used to those sections of the road are driving it,” she said.

The county installed traffic signals at two locations several years ago from Texas 29 to the Burnet County line to help slow traffic, she said.

Public outcry after Koby Draper, 15, and his sister Kirstin Draper, 10, were killed in a wreck along that part of 183 in 2015 helped lead to some plans to build turn lanes, Long said.

The children were in a car being driven by their mother when she was rear-ended by a pickup on April 22, 2015, while trying to turn left onto Sarasota Springs Drive. The driver of the truck, John Canche Alvarado, initially was charged with intoxication manslaughter but then last year pleaded guilty to two counts of murder and was sentenced to 40 years in prison.

Statistics from TxDOT show that from 2013 to 2016, the last year statewide figures were available, U.S. 183 from Texas 29 to the Burnet County line had a crash rate that was 52 percent lower than other comparable undivided four-lane roads. According to TxDOT, though, the number of crashes has been growing on that stretch of U.S. 183 from 35 in 2013 to 73 in 2017.

Officials remain concerned about it. There were an average of 10,670 cars traveling along that 12- to 13-mile stretch of 183 daily in 2016, said Diann Hodges, a TxDOT spokeswoman.

“There is a lot more development up there as people are building homes and neighborhoods,” she said.

The wreck that killed Norman and Theresa Burton is still under investigation, said Robbie Barrera, another DPS spokeswoman. The crash started when the driver of a northbound 2007 Chevrolet Silverado swerved left to avoid another vehicle and struck a 2016 Jeep Cherokee also heading north, a DPS report said.

The Jeep veered into the southbound lanes and struck Norman Burton’s 2007 Cadillac head-on, causing the Cadillac to strike another vehicle headed south.

Ed Burton said his brother and mother were returning from selling her house in Granbury when they were killed. His mother had been living with him in Austin for a few years after his father died, he said.

“She was an amazing homemaker,” he said in a recent interview. “I never asked her to take care of this or that, or clean the house or have dinner ready, but that’s just who she was.”

His brother also lived in Austin and worked in technology sales.

“A lot of people knew him in Austin. … He was just one of those happy-go-lucky guys who was always ready to meet up for a drink or a float on the river or to grab dinner.”

Ed Burton said he hopes talking about the wreck will help save someone else.

Register as our user to receive news and updates!